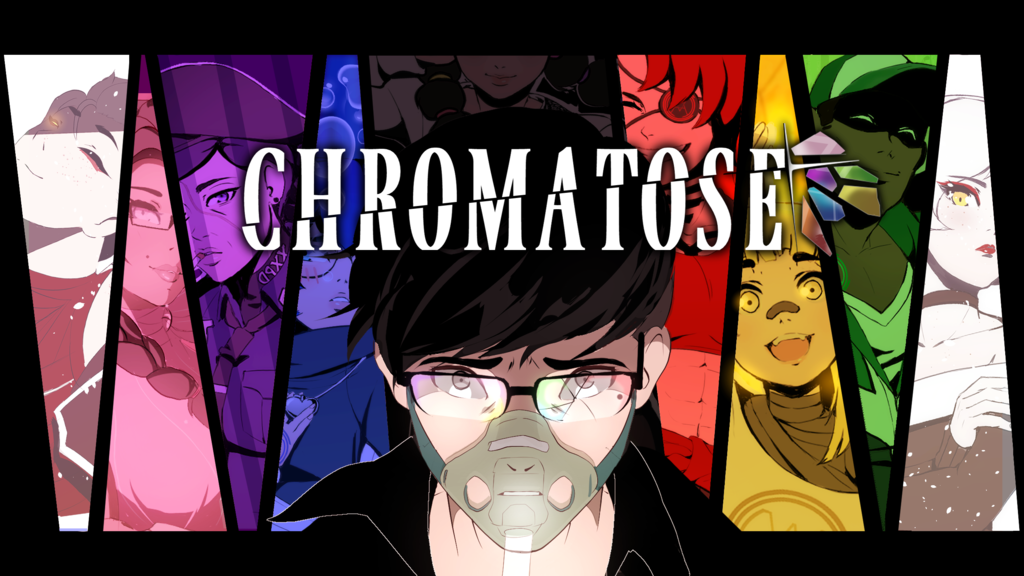 Latest Updates from Our Project:

Hey all, Akabaka here with another set of updates:

COVID-19 has kept things kind of crazy with our team, with most of the members returning to work on Chromatose imminently.  In the meantime, we've made a lot of headway on Purple that we're excited to share!

A 'panopticon' is a controversial type of prison where prisoners' cells are built in a ring around a central guard tower, their cell doors facing inward to allow continuous surveillance of any and all prisoners by unseen guards in the tower.  The constant threat of scrutiny forces prisoners to act as though they are always being watched.  This is the theme of the purple world!

The whole zone has a rainymood Noire aesthetic to it as you traverse the mind of Mercy, the purple mark.  You will have to collect evidence to prove yourselves innocent of crimes, real and imagined.

Speaking of Mercy, she's the final addition to the cast: a hard-boiled yet motherly Police Captain whose guilty conscience has turned her own memories against her...

...and locked her up with every memory she has of herself that she regrets.

This story runs parallel to Imogen's world, so I am excited to show you the parallels between their arcs.

My updates on this arc were delayed due to the recent tragedy of George Floyd's killing.  As a black developer, I was not only upset and distracted, but deeply conflicted about posting about a police officer character that you are supposed to like and sympathize with so soon after what had happened.  After I ran a poll on twitter in which many of you were supportive of delaying updates, I decided that it was best to hold off on updates until it felt right in my gut to do so.

In the meantime, while my team recovered from losing their jobs thanks to COVID-19 shuttering their businesses, I developed a game in a little over a week for the Dread X Collection: Sucker for Love!

Smooch an eldritch horror in this spooky entry in the Dread X Collection Volume 2!  Follow DreadXP for updates and release info , and get the collection of 10-12 games in early August!

With the money I was paid to make this project, I've nearly 100% bridged the gap needed to add voice acting to Chromatose!

I'm pleased to announce that the 2 hour Pink/Green double demo is now complete, and available for download!  If you have beta access, you can get the download from the same link that I sent out for the last beta build.  If you don't have beta access, now is a good time to snag it -- there's now about 4 hours of beta-access exclusive gameplay already in the folder (including the Uncolored Demo), and a year's worth of content still on the way.

The uncolored demo, featuring full scenes with Izzy, Lilith, and Isaac, is included with beta access!

This double demo lets you freely take the elevator between the Pink and Green worlds; the Precarious Penthouse, and the High Heavens.

The Precarious Penthouse is an art gallery and apartment that rests unsteadily on the fingers of a colossal statue being sculpted by the person trapped there-- Sheer.

The Precarious Penthouse introduces a new combat mechanic that pits you against your former self... I don't want to spoil what it is, but what I can tell you is that I've also upgraded the combat animations!

Also, after beating her level, you get to spend some quality time alone with Sheer in her studio!


In the cloudy High Heavens... well, I can't say without spoiling.

But this zone will be a nice respite from the other nightmarish worlds, especially Imogen's Yellow world.  It's peaceful, harmless, and there's powerful ways to heal state of mind here!  There's a new State of Mind value unique to hanging out with Laslo!

He is pure cinnamon bun, too good for this world.

The Pink/Green demo has about 1.5-2hrs of content, and is selectable from the main menu under the "Demos" option!

Once again, please be respectful of others that have not seen the scenes yet!  To be brief:


Also, now that I have a second to talk about PAX and Dreamhack-- they went great!!  Thank you to everyone who stopped by to play our demo!  I learned a lot from watching you all play the demo, and I've already implemented a lot of the QoL stuff that was asked for.  I'm glad I went-- I gained a lot of perspective on the indie scene and met a lot of supportive devs.

Shutdowns (resulting in mutliple Chromatose devs losing their jobs) and quarantines caused a few speedbumps during development, so it took us longer to get this demo out than we expected.  That said, we're on a roll and are getting started right away on the Purple zone. By being a remote dev team and having budgeted/prepared well, now that we're past those speedbumps, we are business as usual for development for now.  The kickstarter funds are hard at work, and we want to thank you for supporting development and making this all possible!  We'll keep you posted on any updates on our side.

I'm always on the discord if you want more frequent info about what we're up to, or if you just want to chat about the game!  Alternatively, I also update the twitter at least weekly.

Hey everyone, Akabaka here with a bunch of updates!  Updates you may have already seen if you follow my twitter!

First of all, I am excited to announce that CHROMATOSE won "Best RPG" for Dreamhack Anaheim 2020, and we've been invited to present in their indie section on February 21st-23rd!

If you're going to Dreamhack or you're near the LA area, you should drop by and say hi! And if you're not from the west coast...

...You can catch us at PAX East the next weekend because we also are an Indie MEGABOOTH official selection!  I'll be there on Saturday and Sunday (Feb 29th and Mar 1st), so drop by and say hi if you're going to either event!  I've been designing the booths for each event, and I'm getting more and more stoked every time something shows up.  Made some new splash art in preparation for the conferences, and got a Texas-sized banner to hang up!

The labradoodle is for scale.

In terms of game development, I've also made a lot of progress on that front since the uncolored demo: the pink demo is done and ready to go!  I'm holding off on releasing it until I also have green completed so that you can experience both at the same time, but in the meantime, here's some teasers!

This whole Precarious Penthouse zone balances and tilts atop a colossal statue's fingertips.  Furniture slides around, the horizon shifts, and other physical effects take place.  I added in some positional audio (not included in this video) and some additional screen effects to enhance the effect.  Yuzu is working on the OST for this zone now!

Added in some (WIP) special effects for pink card effects-- stopping time and preventing enemy attacks for a couple seconds.  In certain fights, effective use of pink and green cards can stunlock enemies from full health to death, take a look!  Points to anyone who can guess what game's special effects I referenced while designing this effect, haha.

Also, the queen herself got some more expression portraits for her hangout!

That's all for now, stay tuned for Green arc progress and convention updates!  Thanks for supporting development!

Hey everyone, Akabaka here with the next release: a triple-serving of scenes for Isaac, Izzy, and Lilith!

Each scene runs 15-20 minutes-sh for an extra hour of content this month!  Play them in any order!

On the development side, it really feels like I'm hitting my stride now since I got these scenes done much faster than I usually do.  I think they're also really killer additions to the story.

All three of them have dozens of shiny new portraits to go with alternate costumes for these scenes or updated art, and are looking better than ever!

That said,  these scenes have a lot of reveals in them!  If you're planning on playing CHROMATOSE blind and unspoiled on its release day, then you should not play this installment.  Otherwise, I think you guys are really gonna like this one!  It mainly covers a portion of each characters' pasts.

This is the first of many beta access-only updates, so if you backed to the appropriate tier ($25+ during Kickstarter campaign, or $30+ via Backerkit) I'll be messaging you the link to the download folder!  These stories are selectable from the main menu under "Noncolored Demo."

(Note: there was a typo a few updates ago.  Beta access is still as it's listed in the campaign rewards list -- $25 or more from the Kickstarter campaign, $30 or more from backerkit)

You can still buy access on the Backerkit Page here!

Backerkit preorderers, I'll be messaging you to confirm payment and distribute the download folder if you have access!

On another note, this is one of the first glimpses into serious spoiler territory, so please be respectful of others that have not seen the scenes yet!  To be brief:

That's all for now, Laslo and Sheer (Pink and Green) will be coming in about a month!  See you then, and thanks again for supporting development!

Hey everyone, Akabaka here with a whopper of an update!

First of all, thank you everyone who came to see CHROMATOSE at PAX West!  It was my first time running a booth for my game, and it was an amazing experience.

The last time I updated y'all, I released the Yellow Demo immediately after PAX weekend, and I'm happy to say that we've kept momentum and are making progress on multiple fronts, take a look:

A brand new addition to the Coma World, The High Heavens is Laslo's mind, a cloudy, heavenly cathedral.  As with every zone, High Heavens is home to a few unique twists to the CHROMATOSE formula that will set it apart from every zone you've seen so far.

Equally gorgeous is our boy, Laslo, the wholesome green bean himself.  He's finally got his art, and you'll be able to meet him when the Green introduction and Pink update are published in December/January.

As we continue to develop CHROMATOSE, it becomes easier to make new levels as the growing repertoire of assets and stylistic references grows larger, and the art improves as a whole.  As such, sometimes we revist older assets and give 'em a face lift.  This month, it was the Precarious Penthouse.

This whole zone balances and tilts atop a colossal statue's fingertips.  Furniture slides around, the horizon shifts, and other physical effects take place to really drive the feeling of being in a... well, precarious penthouse.

Sheer's getting some updated portraits too!

I'm also making a whole bunch of fake paintings to put in the background of the art gallery, here's a few!  Figured it's got an art gallery, so I wanted to try to capture the feeling of seeing art made by a real person with meaning behind it, so I'm putting some heart into these pieces in the name of authenticity.

If your favorite charcter is Izzy, Lilith, or Isaac, I have great news: you're getting a second helping of them in a month!  I'm excited, because now that the exposition is out of the way, these scenes will be about each character and their pasts.   There's going to be many clues dropped about the identities and motives of each person in these scenes, so get your thinking cap on and get hyped!!

Also, this will be the first installment of content that you can only access if you've gotten the beta pass during the campaign or from the backerkit.  You can still get access any time from here:

Here's some teasers from Izzy's second meeting in the meantime, thanks for supporting development!